Some Viral Videos You Need to See to Not Believe

With millions of videos streaming through cyberspace, the chances of breaking out and going viral is becoming harder by the upload. And some aren’t above trickery to stand out. The practice is becoming so prevalent it has spawned its own subgenre -- Viral Fakes. And why not? What better place for modern day class clowns to hone their craft? Guerilla advertisers have also embraced this form to connect to their most coveted demographic -- men 18 to 24. And by the views these videos are getting, the strategy seems to be working.

The pattern is becoming familiar. First is that initial “Woah” factor. “Did I just see what I thought I saw? I don’t know, let’s watch it again and see.” Next is the rush from passing it on. Who hasn’t typed “You’ve gotta see this” in an email subject line? And finally there’s the pleasure of exposure. The idea of pulling back the curtain and showing that the video you thought was so cool last week is not all it seemed to be.

And if you don’t think you won’t get fooled again, there’s a Nigerian prince I want you to meet.

Here are eight eGuiders picks for the Best Viral Fakes You Have to See to Not Believe. We apologize if we’re spoiling the magic for anybody.

Why We Were Amazed:  To show off the capabilities of his cool looking new Nike shoes, Kobe Bryant faces off against an Aston Martin. As the sports car zooms towards him, the Laker superstar leaps over the car and lands safely behind it. 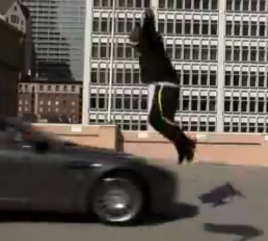 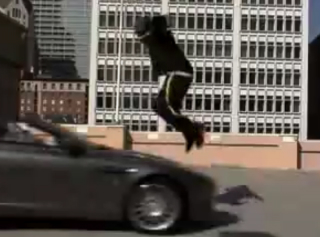 Behind the Curtain:  The video was created by Wieden+Kennedy to promote the Nike Hyperdunk shoe line.

Something Up Our Sleeve:  As revealed in "Kobe Bryant Car Jump Exposed," Kobe is standing about a foot to the left of the car as it passes by. The camera angle makes it look as if he is directly in front of it. Whether the NBA’s reigning MVP is able to jump high enough to clear a speeding sports car is still up for debate. But there is zero doubt that the Aston Martin had any chance of clipping Kobe when he filmed this clip. 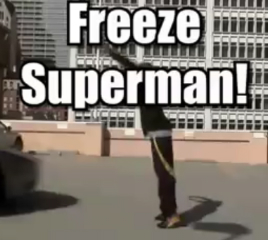 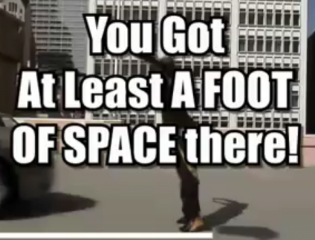 Why We Were Amazed:  During the telecast of a Triple A baseball game between the Tacoma Rainiers and Fresno Grizzlies, Tacoma batter Brent Johnson yanks a curveball down the left field line. As the ball heads towards the corner, the Fresno ball girl appears to scale the wall -- “Spiderman style” -- to snag the fly ball with a leaping catch. 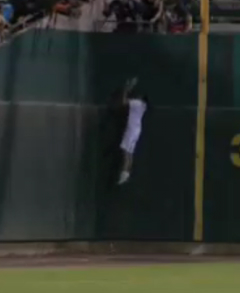 Behind the Curtain:  The video was produced by the Element 79 agency for Gatorade. Reportedly, Gatorade shelved the campaign and the video was then leaked to the Internet. If you look close at the last shot, there’s a Gatorade bottle sitting at the ball girl’s feet.

Something Up Our Sleeve:  As detailed in great length by Snopes.com, the spot’s director Baker Smith revealed all in a ShootOnline interview. The ball girl is actually stuntwoman Phoenix Brown. Her incredible leap came courtesy of a harness rig and Framestore CFC. Attached to the wire rig, Brown was literally pulled up the wall by two colleagues. The wires magically disappeared during post-production. 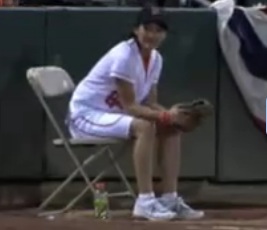 Why We Were Amazed:  A Rick Astley look-alike, down to the beige trench coat and black t-shirt, commandeers a timeout during an Eastern Washington University woman’s basketball game and “Rick Rolls” the crowd. As “Never Gonna Give You Up” plays over the PA, the entire gym, from the cheerleaders to the players to the fans in the bleachers, get caught up in the spirited celebration. 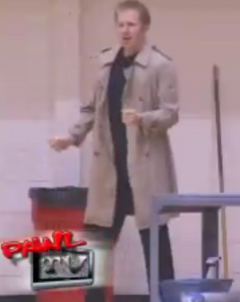 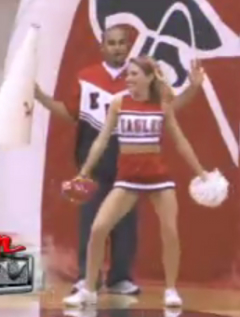 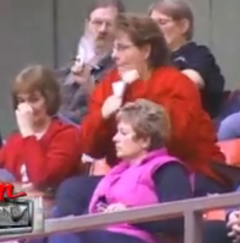 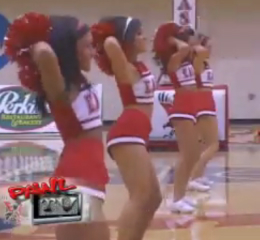 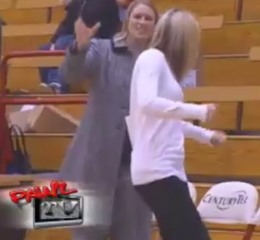 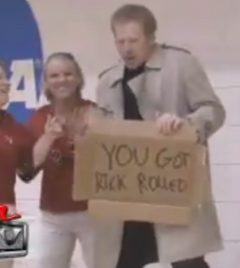 Behind the Curtain:  The video is the brainchild of EWU student Pawly P, an aspiring filmmaker who wanted to put his own unique stamp on the Rick Rolling phenomenon. His video became such a sensation that the New York Times actually picked up the story.

Something Up Our Sleeve:  The video didn’t quite happen the way it appears to unfold on YouTube (or in the New York Times story for that matter), as Pawly P himself reveals in his follow-up video.  The footage was captured over the course of four EWU games and then meticulously edited together. Pawly P does an excellent job with continuity and there really isn’t a give away shot in the video. And maybe that’s the biggest give away of all. The video is too good. With multi-camera angles, including a shot of the scoreboard where the Rick Astley video is playing, it appears too smooth and calculated to have been captured spontaneously. 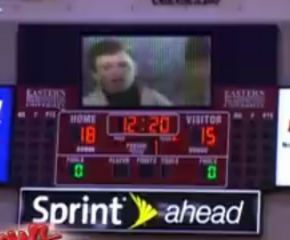 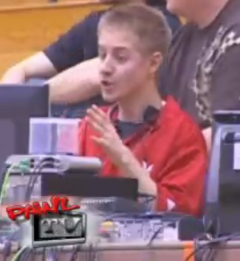 Why We Were Amazed:  Under the cover of darkness, a band of grungy looking street kids scurry to a lake front. One unpacks a surfboard and paddles out into the night. His buds rush to a bridge spanning the waterway. One lights a bundle of dynamite and hurdles it into the water. Moment later, the TNT explodes and a massive water funnel shoots up. The funnel dissipates, causing some narly-looking waves. The surfer catches one and rides it to the shore. 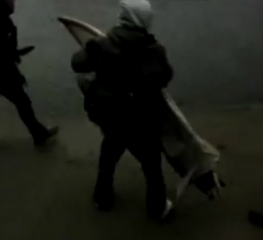 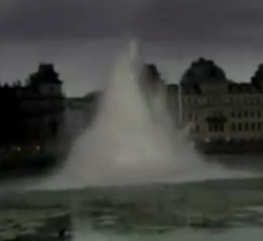 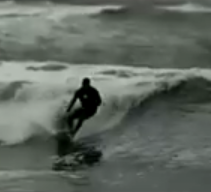 Behind the Curtain:  Created by Saatchi & Saatchi to promote surfing clothier Quiksilver, the footage was shot on high-def cameras and digitally altered in post to make it look as if it had come from a mobile phone camera.

Something Up Our Sleeve:  This myth is actually dispelled by the masters themselves. Discovery Channel’s MythBusters recreate the stunt using a robo-surfer and 200 pounds of dynamite. The results? The massive underwater explosion blows the water sky-high, but causes nary a ripple, let alone anything remotely resembling surf-worthy waves.

Why We Were Amazed:  Hanging out on a lazy (Sunday?) afternoon, a dude takes off his sunglasses and tosses them at his bud sitting on the couch. His friend miraculously catches them with his face. Pleased with the results, the duo decide to increase the degree of difficulty. In a series of shots, the glasses are tossed from the roof of a house, a highway overpass, the doors of an elevator, catapulted from a skateboard, and exchanged between two moving skateboards. Each time, they land squarely on the catcher’s face. The grand finale is an attempt to toss them into a moving car. The glasses make another perfect landing. 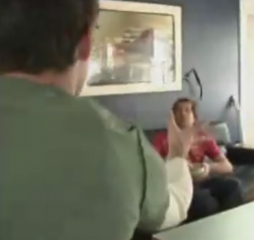 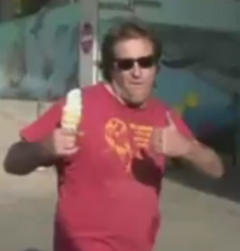 Behind the Curtain:  Hmmm, what’s the most obvious thing in this video? Sunglasses, you say? What a surprise! It’s a promotion for Ray-Bans made under the company’s inhouse division Never Hide Films. This is the debut effort of director Benzo Theodore, who has made a name for himself creating eye-catching (pun intended) virals involving visual trickery (see the next entry).

Something Up Our Sleeve:  This is nothing more than good old fashion moviemaking magic at its best. YouTube character Captain Disillusion offers the most detailed deconstruction of how the bit is done in "Catching Glasses" Explanation.  Most of the catches are achieved by playing the film backwards. The glasses start on the catcher’s face and are pulled off with a string. When the footage is reversed and the string digitally erased, it appears as if the glasses are flying onto the face. In the shots involving the catapulting skateboard and car, the catcher’s face, wearing the glasses, are superimposed over the original footage just at the right moment to enhance the illusion that he has made the amazing catch.

Why We Were Amazed:  A dude in a bright red wetsuit stands on an ocean pier dangling a fishing rod with a huge hunk of red meat hanging from it. After tossing a surfboard and the rod off the pier, he leaps into the ocean. Before you can say “surf’s up,” he has hooked a shark. As the shark tries to swim away, the dude gets up on his board and, holding the rod, begins trolling through the water. Thanks to the shark, he enjoys a wild ride. 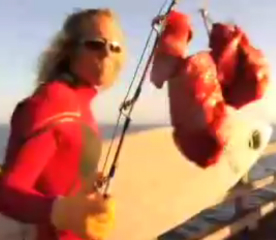 Behind the Curtain:  The spot was put together by director Benzo Theodore (of “Sunglass Catch” fame) for Arnette Sunglasses to launch its new “Notorious” line. The video can be found on its website arnette.com.

Something Up Our Sleeve:  As cool at the video looks at first glance, upon closer inspection, two things stand out. The first is the shot when the surfer casts the bait. Whatever is attached to the line, it’s definitely not a hunk of meat. The second is a shot of the surfer trolling behind the shark fin. If you look in front of the fin, there’s an obvious boat wake -- no doubt made by the vessel really towing our daring surfer.

Why We Were Amazed:  A title card reading Hidden Camera Surprise is followed by what appears to be a prank being set up by a Candid Camera type of show. A smiling young man is put into a mailbox by two colleagues. People come up to the box and deposit their letters. Much to their surprise, the letters come sailing back at them. Hilarity ensues until one guy who gets punked isn’t amused. He pulls out a gun, points it into the slot, and fires away. And, as the final card reveals, this ends our prankster’s joking ways forever.

Behind the Curtain:  As Snopes.com reports, the original version of the video was actually a commercial produced by Ogilvy & Mather’s Buenos Aires office for a print production company named Type & Magic. The idea is that Type & Magic knows you don’t like surprises, and if you use its services, you won’t get them.

Something Up Our Sleeve:  Here’s an example of a video that started out as one thing and through viral power morphed into a viral legend. At some point, an unknown prankster chopped Type & Magic’s tagline off the spot and uploaded it with a cryptic foreign title card. (Anyone here read Russian?) It even includes a url for a Russian site. The site exists, but I wouldn’t suggest clicking on it. (Maybe this is how the Conficker virus started?) The url listed above is the one with the most viewings, but there are dozens of versions on YouTube. Each entry contains the Russian captioning, but none features the original TV commercial’s ending. And all help perpetuate the myth of the fatal Russian Candid Camera show.

Why We Were Amazed:  A device filled with what seems like an endless amount of pipes, strings and drums starts spitting out a series of silver balls. As each ball hits its target, it creates a rhythmically perfect, jazzy melody.

Behind the Curtain:  This is actually a computer generated animation created by Austin-based Animusic, which specializes in making videos featuring wacky music instruments.

Something Up Our Sleeve:  Like “Russian Candid Camera,” this is an example of a video that started as one thing and took on a viral life of its own. When the video was first uploaded, there was no attempt to hide that it was a computer animation and how it was created. Then someone got the idea to pass it off as an actual, man-made device. 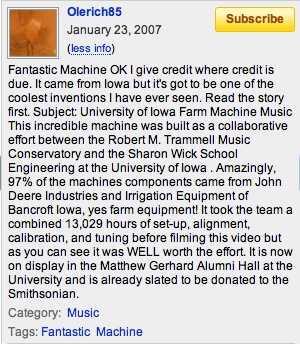 About.com: Urban Legends presents the explanation in detail crediting it to an email contributed by D. Sanchez dated November 18, 2006.  Though Urban Legends reveals that there is no "Robert M. Trammell Music Conservatory," "Sharon Wick School of Engineering," nor "Matthew Gerhard Alumni Hall" at the University of Iowa, this information appears on multiple versions of this video roaming around YouTube -- two of which were recently uploaded right around April Fools’ Day.

Chris Koseluk is a freelance writer whose work has appeared in The Hollywood Reporter, Video Business and Movie Times Magazine. Two of his favorite Internet things are video clips and games. Having written about the entertainment industry for over 15 years, Chris tries to keeps it real on his website www.mediamischief.com.