Peter Sollett was born in Brooklyn, New York and graduated from New York University’s Tisch School of the Arts in 1998. His short film, Five Feet High and Rising, was awarded the Best Short Film Prize at the 2000 Sundance Film Festival and the Cannes Film Festival. His first feature film, Raising Victor Vargas, was developed with the support of the Sundance Institute in 2001. The film premiered at the 2002 Cannes Film Festival, where it was acquired by Samuel Goldwyn/Fireworks Films. Continuing on the international circuit, the film was recognized at festivals in Toronto, London, San Sebastian and Deauville, where it was awarded the Grand Prix. Sollett returned to Sundance for the film's North American premiere in 2003. Released theatrically in March of that year, Raising Victor Vargas ran for six months in major markets, earning critical praise and five Independent Spirit Award nominations. In 2008, his second feature, Nick and Norah's Infinite Playlist, premiered at the Toronto Film Festival. Starring Michael Cera and Kat Dennings, the film was released by Columbia Pictures to critical acclaim. He has taught film directing at Columbia University's Graduate School of the Arts and the University of Southern California. Sollett is currently developing new projects. 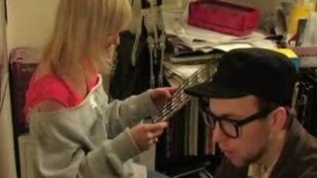 The 'Burg is a web comedy series about the lives of hipsters in Williamsburg, Brooklyn. Not only is it hilarious and keenly observed but it has absolutely fantastic music and a cast that nails the show's sophisticated comic tone. Someday, Hollywood will make a comedy about life in Williamsburg and we'll look back at The 'Burg and think, "damn -- these guys nailed it years ago...."