An Interview With Stop-Motion Filmmaker PES 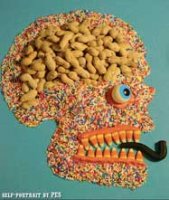 1. I like to start these by having people introduce themselves. Can you tell us a little about your background and how you became interested in stop-motion animation?

I knew absolutely nothing technically about stop-motion animation until I had the idea for my short film Roof Sex. I studied literature and printmaking in school, not film or animation. I don't think I really knew what a director did until I had to figure out how to make my own film.

With Roof Sex I felt that the right technique for the idea would be stop-motion, so I taught myself how to animate by doing tests with doll furniture on my dining room table. In the course of making that film, I realized that I had lots more ideas using objects, so I started making them. The ideas are what interest me, not the technique.

2. When did you start going by the name of PES? How did you choose the name?

PES is a family nickname. It comes from my last name, Pesapane. People have called me Pes my whole life, so it just made sense to me to sign my films with it. It's easy to remember and reminds people of one of their favorite candies.

3. Your shorts films really seem to celebrate the joy of imagination. Can you please share some of your creative influences and how they have helped shape your vision?

As far as stop-motion, the Czech surrealist Jan Svankmajer was my biggest influence. When I first saw his short films I thought, “Wow, this guy is really onto something.” It immediately made me think about how I might use the medium and adapt it to my own tastes and desires.

4. I’m curious, where do you find inspiration for some of your shorts? Do you find that ideas come to you more in dreams, walking around the city, etc? Maybe we can also talk specifically about Roof Sex and Western Spaghetti, how did those projects come about?

I carry a piece of paper and pen with me at all times. I just write stuff down and inevitably certain ideas keep coming up, bugging me. Then it's just a matter of getting them out there so my mind can move on to new things.

With Roof Sex I had inherited this old yellow-gold chair from my parents. I grew up with this chair in our family's living room but was never allowed to sit on it since the room was off-limits to kids excepting the occasional family photo. When my parents finally moved, they bequeathed me the chair. I was sitting in my NYC apartment on night looking at this PRISTINE piece of furniture, thinking "what would HE want to do most in life now that he's free?" Roof Sex became an answer to that question.

As for Western Spaghetti, my mother - who is an amazing cook - used to say, "Great pasta should be firm and never rubbery." I thought this was funny because rubber bands always looked like spaghetti to me, so I built the film around that small nugget. I also liked the idea of making a film in which food is substituted with familiar objects, rather than the other way around, which is something I've done many times in my films. I liked the idea of flipping the tables on myself.

5. How long did it take to make Roof Sex and Western Spaghetti? Can you discuss some of the research that went into making these films? Did you shoot tests? Are they created in stages? I’m sure readers are very interested in your process.

I work on my ideas for a long time. I take notes, make outlines, create lists, do sketches -- anything to develop the idea. I occasionally will do an animation test of something. In general I spend a lot of time incubating ideas and trying really hard to think about them from every conceivable angle. I will talk to complete strangers (the cable guy, the taxi driver, etc) to get a gauge of what's connecting or what's off...overall, I’m less concerned with people liking my ideas and more concerned with 'do they get it'. I want the idea to be communicated clearly and succinctly and I will do anything to get there.

I typically work on my ideas for much longer than it takes to shoot them. In fact, I only pick up a camera at the last possible moment --just long enough to bag the sucker. I did Western Spaghetti in 35 days, one shot a day. With a commercial film crew and resources I could have shot it in 6-7 days, but then who has a million dollars lying around to play with?

6. I’ve noticed that your shorts pay great attention to audio, which is usually lacking in many productions. Can you discuss the importance of the audio in your films?

It’s a critical part of the process for me and as personal as the animation. I do sound design on all my films. My editor Sam Welch and I work on it together, stitching it together frame by frame. I'll spend hours listening to sound libraries, and will often record sounds myself. This is when the animation really comes to life, so it's an enjoyable part of the process for me.

I usually have a specific sound that I am trying to capture, something I hear it in my head beforehand - a specific inflection, or tone. I often animate something so that it can also contain a specific detail of sound that I think is important. Western Spaghetti is filled with these details -- cook's details: the way a clove of garlic CRACKS when ripped off the head, the specific SCRAPE of a butter knife leaving the edge of a pan, the light CLANG of a lid when lifted off a pot of boiling water. I could name dozens of these moments off the top of my head. These are the details that often go unsung in the film, but I view them as the heart and soul of the piece. Thanks for asking.

7. When making web-centric films, is there anything specific in your creative process that is taken into account for working in the medium? What appeals to you about showing your work online?

I like having control over my own distribution. I don't like depending on other people for anything, especially when it comes to my creativity. I just like to make stuff and put it out there, let people enjoy it.

I also like the intimacy of the online venue; the way people lean in to watch something that captures their attention. There’s something magical about it, it's like peering through the proverbial hole in the wall. I get excited about showing them something they haven't seen before.

8. What advice would you give to someone who was interested in learning stop-motion animation and directing?

It all starts with a good idea. A good idea with a mediocre execution is more forgivable than a beautifully animated film of a lousy idea. So, I’d say, work on your ideas. Learning animation is not the hard part. There are many talented animators in the world. But a good idea is still hard to come by.

9. What are some of your favorite original online videos at the moment? It could be animation, docs, comedy, etc.

I saw and liked this animated film "Snow Blood" recently. Tight little film with a beginning, middle, and end that shows the director, Marek Berger, thought through his idea.

10. Finally, is there any idea you can leave us with to help us foster greater creativity online?

Here are some other great videos from PES that we love at eGuiders:

For a behind the scenes look at the making-of Roof Sex:

Marc’s a filmmaker and new-media activist at heart. He recently produced and directed segments for Obama’s historic American Stories, American Solutions television special. In 2007, Marc was fortunate to break new ground on HBO’s John From Cincinnati as the first new-media filmmaker embedded into a television series to organically extend the characters and universe of the show online. In 2005, working with Fox Television and Verizon, Marc got to direct 24: CONSPIRACY - the first original mobile series that was created as a spin-off of the hit TV show 24 and was nominated for an Emmy Award. When he’s not creating content or telling everyone he knows about amazing online videos, Marc is hanging out with his beautiful wife and little girl.